Radius-Valpo named Restaurant of the Year…and nobody is happier then Don Q’s Chef Carlos!

Radius-Valpo was recently named Restaurant of the Year–much to the delight of Downtown Valparaiso’s celebrity chef, Carlos Rivero.

When Carlos Rivero first met Chef Chris Pavlou, owner and chef of Radius, he saw something special. Carlos saw the potential of a restaurant that could help the Downtown Valpo Restaurants achieve a vision that Carlos helped establish 15 years ago. 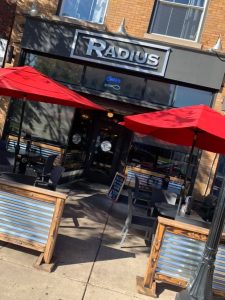 Rivero’s goal was to make Downtown Valpo a destination…and Pavlou would make a difference!

In 2006, Carlos and a few other downtown leaders organized events called Jano Concerts on the Square–held on the Courthouse Lawn that included great food, chef demonstrations, live music, dancing, kids activities, fundraising, and fellowship. At the core of the events was the spirit of working as a community.

The Concerts on the Square brought the downtown restaurants together as friends to create summer events that continued every summer for years. It was the impetus to a downtown that would attract visitors from all over Northwest Indiana and Chicagoland.

The restaurants that participated would eventually organize an association called the Downtown Valpo Restaurants, or Valpodining.com. 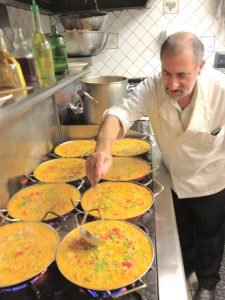 Carlos felt the downtown was losing its grassroots connection to the restaurants. With many of the original chefs having moved on, Carlos knew the secret to getting the magic back was finding a new generation of restaurant owners that understood the values of great service and extraordinary commitment to the community.

Radius is known for big smiles and great service

Carlos knew right away that Chris Pavlou was the perfect fit for Downtown Valparaiso’s unique culture.

Not everyone in Valpo was on board to welcome Pavlou and the Radius-Valpo experience.

Of course, change is hard for many people, especially in a small city like Valparaiso. Many people objected to granting Radius-Valpo a 3-Way license or Downtown Valpo Restaurant membership. Carlos knew people would love Radius if folks in the community just got to know Pavlou.

Carlos attended meetings at City Hall and became an advocate for Radius-Valpo. The Spanish Chef remembered experiencing the same resistance when he opened Don Quijote nearly 35 years ago. According to Carlos, people told him he would never last a year. Carlos never forgot how tough it was to win people over….

The new Radius -Valpo website captures the essence of a remarkable downtown experience!

Carlos’s instincts were right! Radius-Valpo has been a huge factor in bringing the magic back to the Downtown Valpo Restaurant Group. Just try getting a table at Radius-Valpo. The social scene at Radius is the talk of the town. The Radius-Valpo new website, launched in January 2019,  even features a page exclusive for followers of Radius called Social Scene, Radius.

Radius-Valpo has everyone talking… and smiling!

Fans of Radius-Valparaiso will tell you the experience will keep you coming back!  Al Fresco Dining in front of the majestic Courthouse, live music, and servers that love to smile!

If it sounds familiar, it should! Carlos has also won awards for his innovative culinary experiences. It was Carlos that first brought outdoor dining to Downtown Valparaiso. Carlos was the first to bring Valpo’s best music talent to his Don Quijote Restaurant.

Chef Pavlou was recently honored as having the “Best Hamburger” at the 2019 Chefs of Steel Competition. According to Pavlou, the pursuit of creating great recipes is a means to a greater ends… making a great experience for his customers–a trait he learned from his father and the family business.

The hamburger is the canvas for Pavlou’s artistic cooking.

The spirit of working together lives strong in downtown Valparaiso, and Carlos couldn’t be more proud of the success his newest neighbor has enjoyed. Perhaps what Carlos appreciates the most about Radius is its drive to create a wonderful experience for Downtown Valpo visitors.

Just stop by Radius and see for yourself….tell them Carlos sent you!